A voting question works particularly well when inserted occasionally into a keypad round. Teams simply answer a question to which there can be no wrong or right answer, aiming to be in the majority to win points.

For Example. Who were the best musical group. A. The Beatles B. Abba?

(If it should end up being a tie such as The Beatles and Abba both receive 5 votes each, then the host (you) should have the casting vote).

In a Keypad round, Open an On The Fly question. 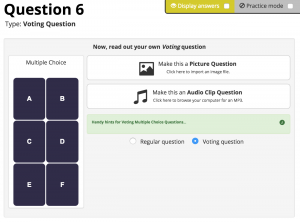 “I will ask a question. Then at the end of the 10 second countdown the most popular answer will become the correct answer. In the unlikely event of a tie then I (the presenter) shall cast the deciding vote.”

Note: Optional Extra instructions. “Go Wide / Evil mode will be disabled for the duration of this question so all teams should submit an answer”.

Now ask an opinion type question and start the 10 second countdown.
Example: “What make the best pets A. Cats B. Dogs“?

Teams then have until the end of the countdown to input their answer. 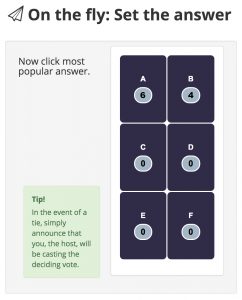 As you can now see, the most popular answer was “A”.

Now simply press A on the virtual Multiple choice keypad to confirm that “A” was the most popular answer and announce, “The correct answer based on public opinion with 6 votes is….. A. (Cats)”. At the same time press the blue button to play the cheering sound.

A welcome addition to SpeedQuizzing version 4 is the ability to use a Quick Question for a Voting Question. If you are already familiar with the Quick Question format, here is an example of how the text file should be named.

Do other planets with intelligent life exist? A. Yes B. No

What is the correct pronunciation of the sportswear brand?
A. Nike or B. Nikey

Which of these three 80s films is best? A. Back to the future B. Ferris Buellers day off C. Ghostbusters

Is Donald Trump? A. Making America great again  B. Making a mess of things

Who will be best remembered in 20 years? A. Justin Beiber B. Michael Jackson C. Elvis Presley

Is eating Horses worse then eating cows? A. Yes B. No

Who was the funniest of the 3 main guys from Friends? A. Joey B. Ross C. Chandler