What is the Sound Clips game?

The Sound Clips game is an audio identification game where the host first announces the name of a song or mystery voice etc. Players then listen to a series of short clips and tap their screen whilst they believe the correct clip is playing, (only one clip will be correct). Points are awarded for tapping the screen while the correct clip is playing along with Speed-Bonus points.

This process is repeated until all the clips in the game have been eliminated.

SpeedQuizzing LTD  do not sell Sound clips rounds. Therefore sound clips need to be created by the host in advance, using music files from your own purchased collection of wav, mp3 or m4a files.

Before incorporating ANY audio into a quiz (whether it be a private or public event), the responsibility lies solely with you (the host) to ensure that you are legally entitled to do so and aren’t infringing on any copyright or licensing laws.

Creating a Sound Clips round

To create a Sound Clips round you’ll need a selection of audio files on your computer (wav, mp3, m4a). The game can include up to 12 audio files.

Located in the SpeedQuizzing 4 Documents folder, the Your Clips folder is the default designated folder for all of your Sound Clips game rounds. Each round should be contained in its own separate named folder. For instance ‘My First Clips Round‘ or ‘Monday 4th Aug 70s disco‘. 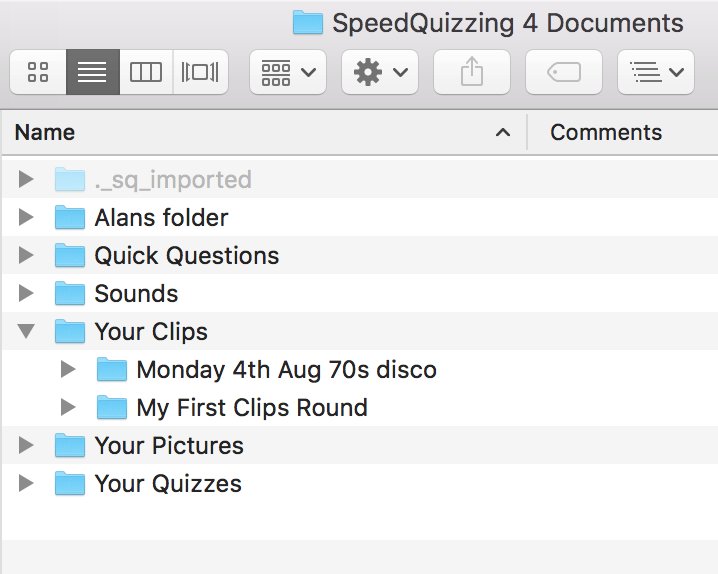 You can create and name folders from within Windows Explorer or Mac Finder or (as described below) using SpeedQuizzing’s inbuilt Sound Clips File Manager. 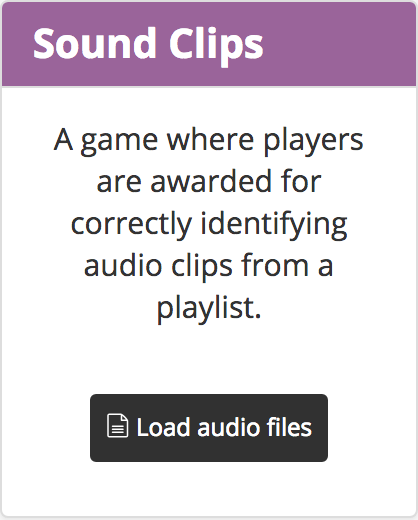 Click Add Audio Files and locate and select the audio files which you’d like to add from within the browser.

Name the folder. This will then be created in the SpeedQuizzing 4 Documents folder, with the selected audio files copied within.

With the folder selected, click the blue Next button to open the Sound Clips game. 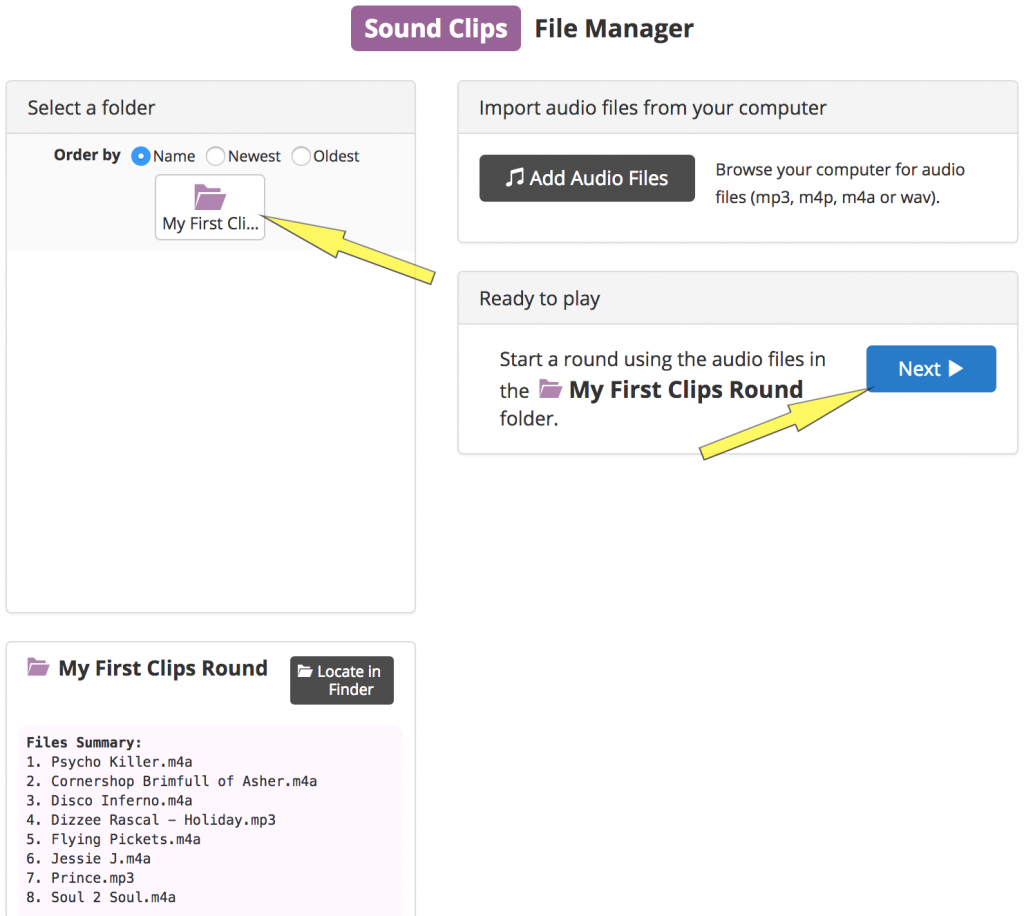 In its basic form the round is now created and is ready to play, with a 5 second section of each clip automatically being hi-lighted near the beginning of each audio clip. However, each clip can optionally be edited prior to the commencement of the game. This can include renaming, adjusting the volume, changing the clip start and end points as well as adding multiple additional colour-coded regions.

Editing a Sound Clips round

Note: All edits are stored as hidden meta data in the actual Audio file itself, allowing the file to be moved and saved elsewhere, including other laptops, without losing the edit.

Drag the black bars to change the start and end points of the regions. Any length of region can be used but generally a 2 to 5 second section is recommended. A common technique when creating a Sound Clips round is to trick the players from time to time by having regions of audio play that sound similar to one and other at their start points.

When editing a region it will preview the selected region after each change. Moving the mouse up or down will kill the preview.

Each Sound Clip has one region by default. However, an advanced feature allows you to optionally add up to three extra regions, thus allowing the host to vary which section of each Sound Clip is played each time the clip is played. The aim of this is to prevent players from becoming too familiar with the section of clip they are listening for and can also be used to deliberately cause confusion amongst players.

Additional regions are colour-coded red, blue and yellow and can be created by clicking the + sign.

Setting the volume of the Sound Clip

Some songs are louder than others. To avoid situations where some of the Sound Clips are noticeably blasting out louder than others, there is a volume slider to the right of each waveform, allowing you to adjust individual sound clip volumes in advance.

Hosting a Sound Clips round

Click the Sound Clips Load audio files button.
Select the folder which contains the Audio files and hit the blue Next button.

Set the Points and Speed Bonus using the sliders and then click the blue Start Game button. 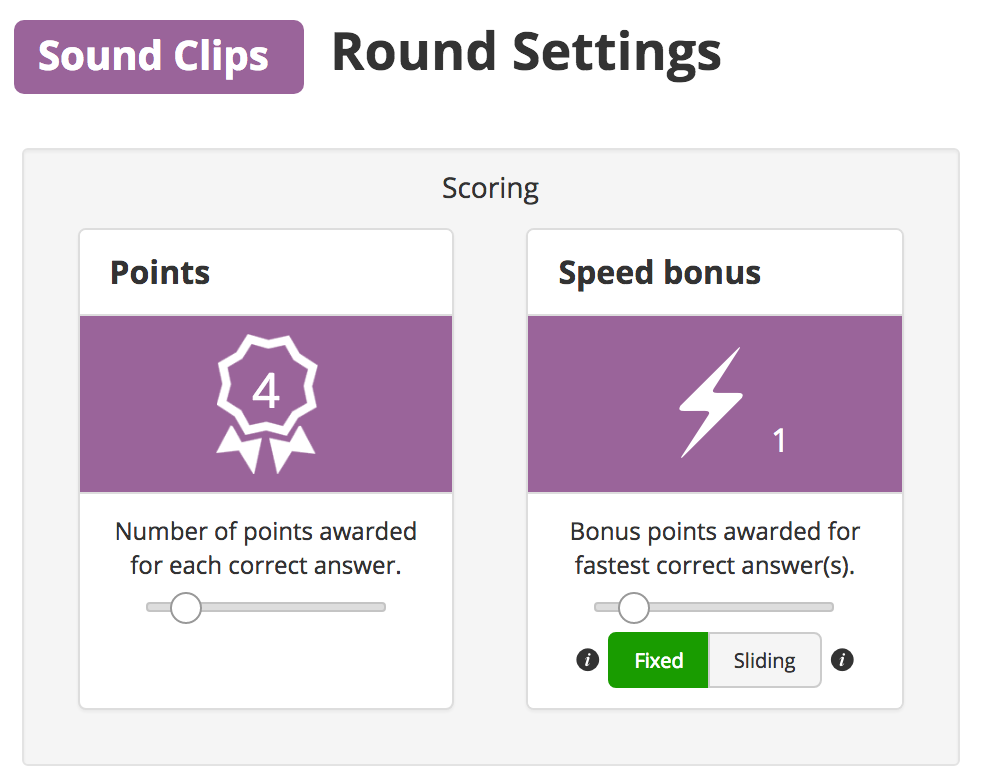 Click Game rules to allow you to read out instructions to the players.

Arrows 1 to 4 on the image below highlight the main controls. 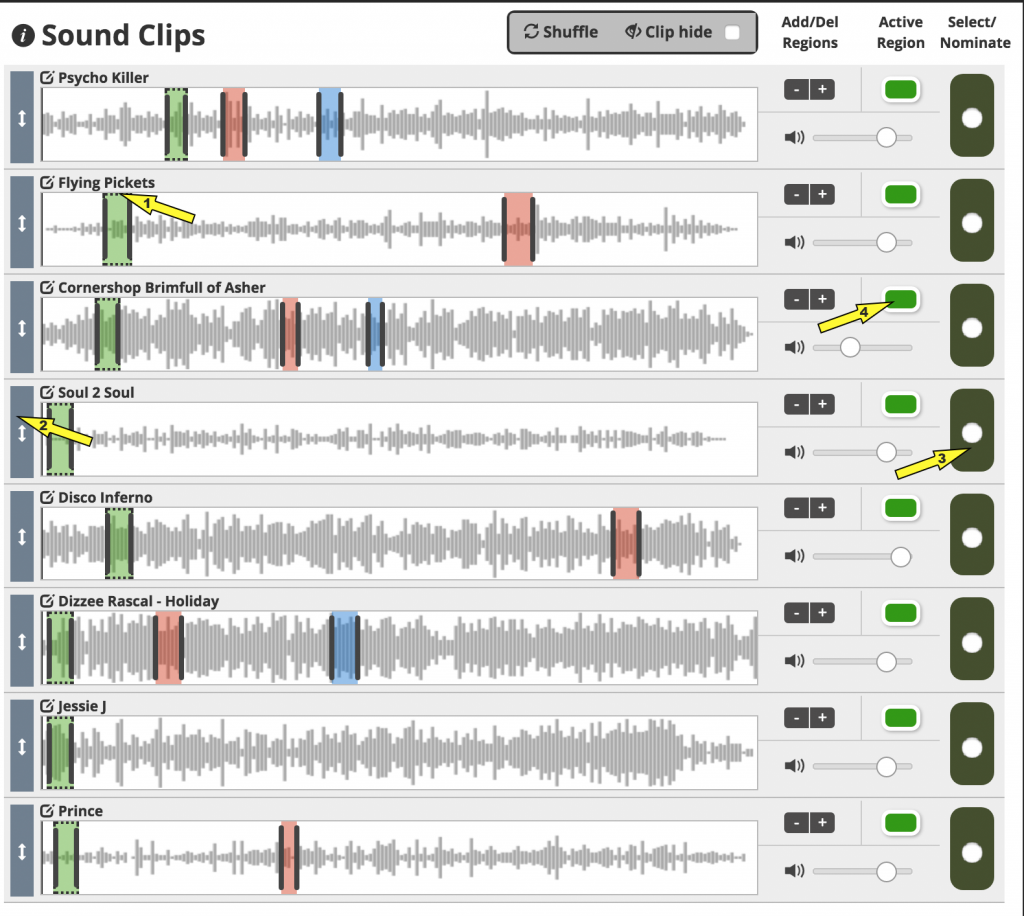 Denotes dotted line which indicates which region of the clip is set to play. This is also reflected by colour coding on the Active Region button to the right of the screen.

Denotes where you grab a clip to move it up or down in the list of clips. (The clips play through from top to bottom).

Denotes the Select/Nominate button for each clip. Pressing this starts playing through the list of clips and will stop after the chosen clip.

When using multiple regions per clip, this button allows you to toggle through the regions to set which region will play on the next play-through.

The premise of the game is for players to be told a name of a clip. I.E “Tap your screen when you hear a song by the group “Soul 2 Soul“. They then listen to an undisclosed number of clips before eventually hearing the correct corresponding clip. Players need to hold off from tapping their screen until they hear the correct piece of audio start playing.

The host decides the order in which the clips will play and can change the order at any point throughout the game. The order can be adjusted by shuffling the whole list, as well as sliding individual clips up and down the list.

Hosts have many tricks at their disposal to try to trip players up and get them to tap their screen during the incorrect clip. These tricks include:

After each clip is nominated and played, it is removed from the list. So ultimately you will get down to one remaining clip. It is important at this point that you announce that some of the original clips are now back in the playlist before nominating the last remaining clip.