The Keypad game is the best place to start when hosting SpeedQuizzing. It is the closest to a traditional pub quiz, as well as being great fun in the classroom or workplace. Many hosts find the Keypad game adequate for  all of their hosting needs. It’s easy to host and includes plenty of optional game variations to keep players interested and engaged.

Tip: It is advisable not to pre-warn players how many options a particular question will have to choose from. Instead you should simply stop reading at the end of the final option.

Tip: Little reminders of this along the way can help, especially if new players join in mid-game.

Tip: Occasional reminders of this throughout a round can be a good thing.

How to load a Keypad round. 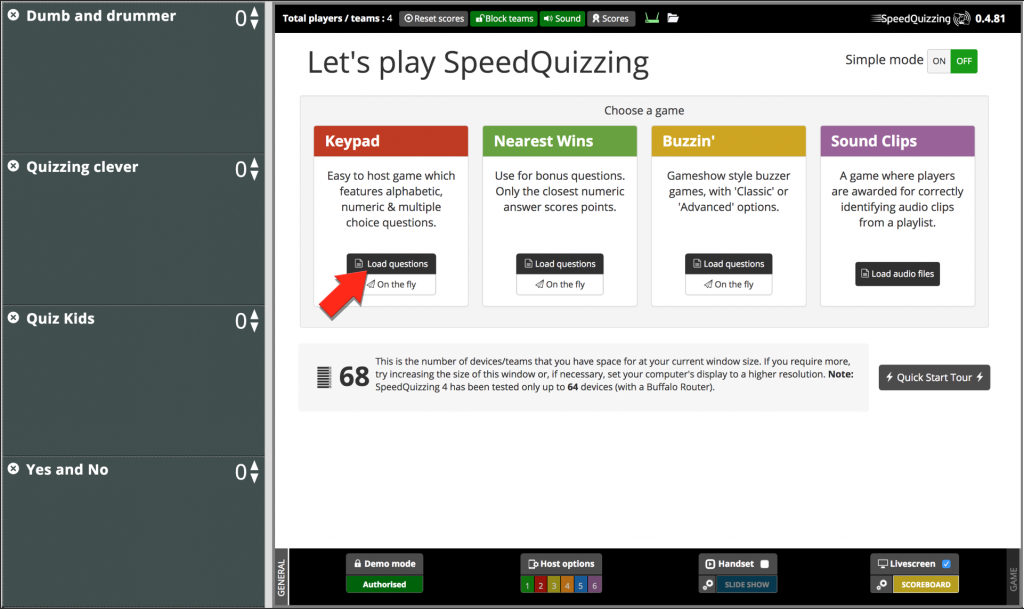 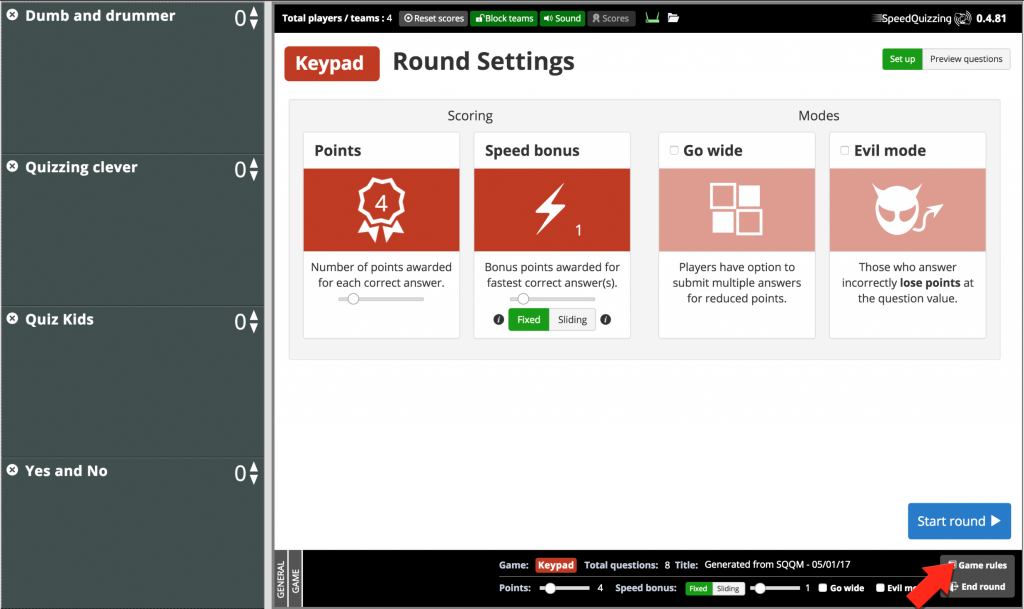 You are now ready to read out one of the three types of question from the laptop screen.
Tip: Whilst this box is ticked, instructions will appear on the player’s device prior to each question. This can be unchecked once all players understand the game. 

How to read a Keypad Question.

Tip: With a large noisy crowd it is advisable to repeat the question before clicking Start Timer. Also on a multiple choice question it is good practise to repeat the Multiple Choice options during the 10 second timer.

Announcing the correct answer and results.

Tip: When instructed to click a blue button this can be done either on the host screen or using the Optional Quizmaster’s handset, or alternatively by using spacebar or number 5 on your computer keyboard as a shortcut.

Tip: On the rare occasion where no correct answers are submitted, these two aforementioned steps will not happen.

Any of the three types of Keypad question can also include a picture which will be beamed to the players devices. 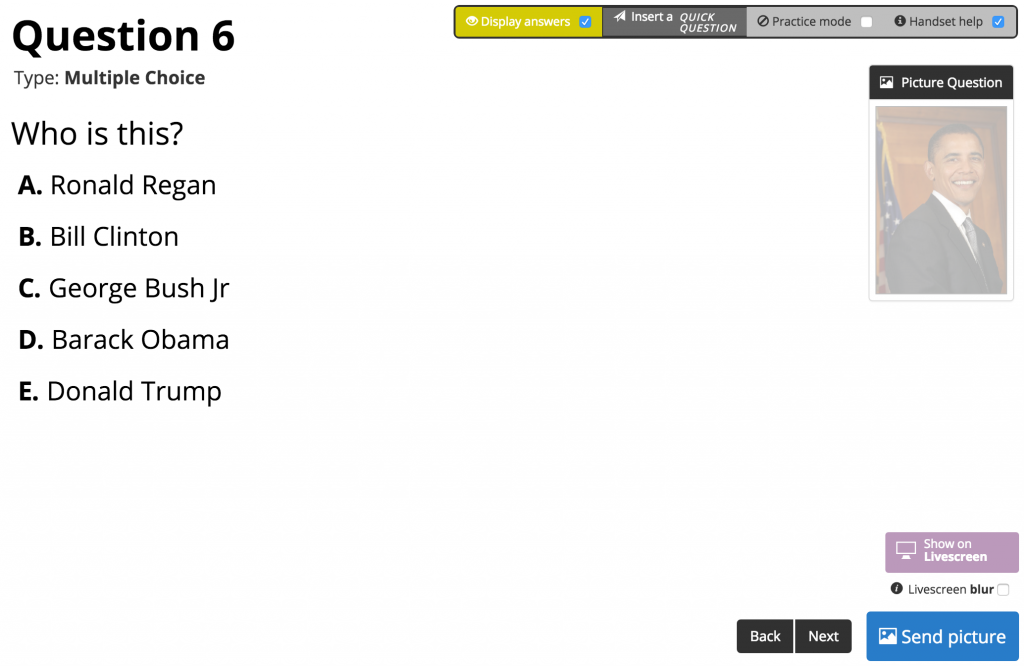 Tip: With a Multiple choice picture question, it generally makes most sense to read out the question whilst the picture is transferring, but then read the options out once the picture has appeared on the devices.

Once you are familiar with the keypad game, you might want to spice things up a bit in later rounds. For instance, you might introduce Go Wide in Round 2 and Evil Mode in the final round. 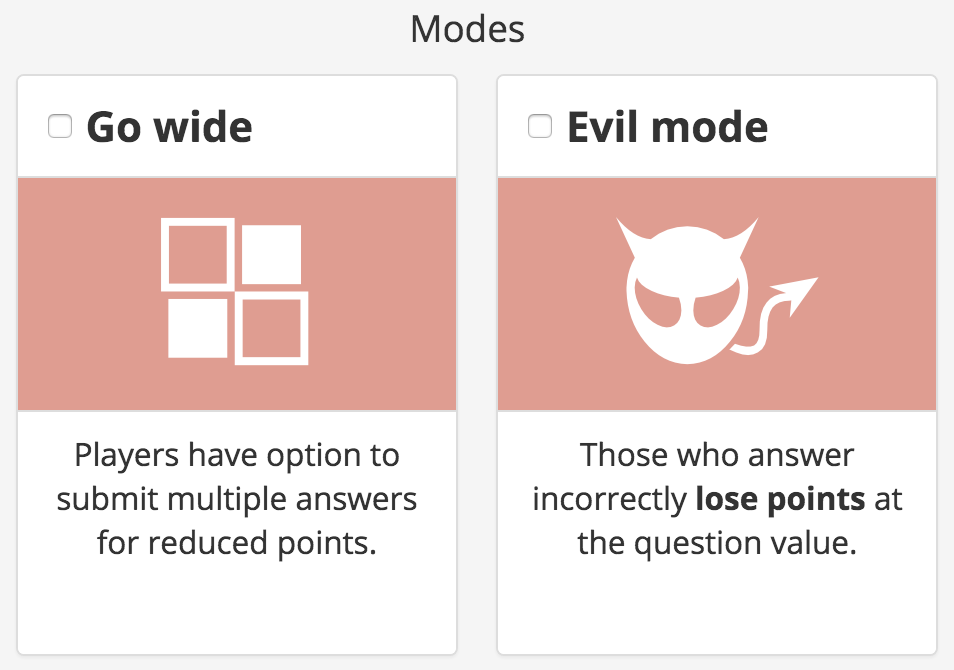 Tip: Hitting the Game Rules button with Go Wide or Evil Mode enabled will adjust the rules (for you to read out to players) accordingly.

Go Wide gives players an extra decision-making step, whereby they have to decide how confident they are with their initial answer and whether they should choose to widen their chances of scoring points by submitting a second alternative answer. However, by Going Wide (submitting two answers) they forfeit half of the potential points on offer for answering this question correctly.
Although in a Numbers question the Go Wide scoring works the same as with Multiple Choice and Letters questions, it handles Go Wide slightly differently. Instead of opting to submit two answers instead of one, a player, after hitting enter, taps anywhere on the screen to widen their submitted answer by one number either side. For example, Going Wide on the year 2013 will additionally include the alternate answers 2012 and 2014. (Three answers for the price of one)
Note: It is possible to Go Wide and still win the Speed Bonus, even beating slower teams who haven’t Gone Wide.

Evil Mode is easier to explain and understand than Go Wide and works great in the final Keypad round of your event.
Evil Mode again introduces a decision making gamble for players by giving them the option to play safe by not submitting an answer at all. This is because an incorrect answer will incur a penalty in the shape of minus points. Ouch!
So assuming the Round settings are set to 6 points for a correct answer plus 4 speed bonus points, with Evil Mode enabled, each time an incorrect answer is submitted that team will lose 6 points. If they do not submit an answer, they will neither win nor lose points.