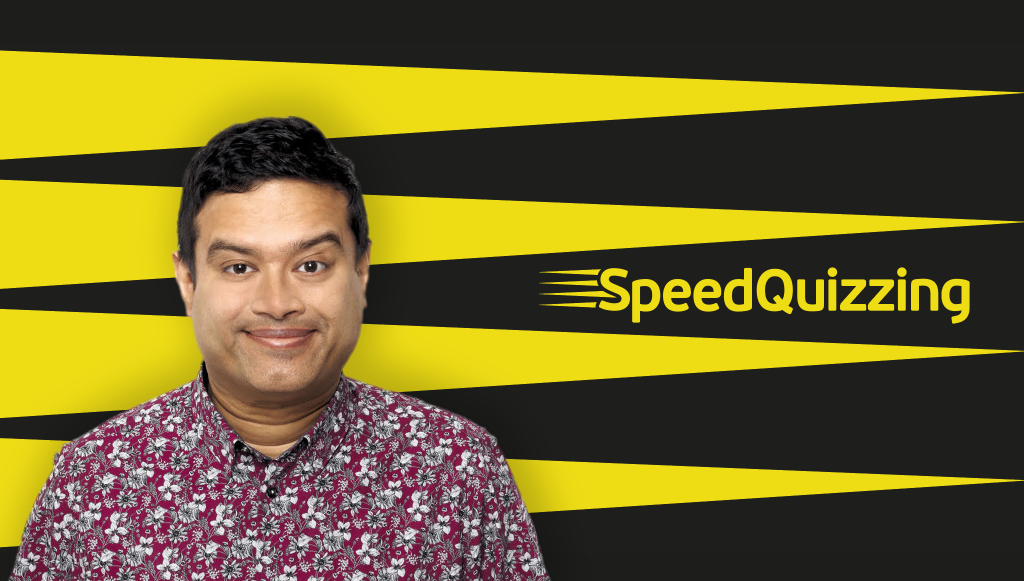 Six is a topical number these days, isn’t it? It’s cropping up everywhere, from politics and legislation, through to sport and music. So far this year, we’ve had the Rule of Six governing our social interactions, the Six Nations Rugby Championship entertaining us (well played, Wales), and we’ve just seen the launch (and swift demise) of the European Super League with, you guessed it, six English clubs initially involved. Three may well be the magic number, but six is definitely the new kid on the block.

So, when it came to us choosing a number to accompany our latest initiative with The Chase star Paul Sinha, there was only ever going to be one winner. Plus, we liked the alliteration it offered.

Ladies and gentlemen, we give you Six from Sinha!

From Monday (26th of April), Six from Sinha will appear as a free bonus round in the digital question packs that UK-based quiz hosts receive when they purchase an activation from us to run a SpeedQuizzing Pro or Live event.

Every question pack will contain a unique set of six questions, written by ‘The Sinnerman’ himself, to test the brains of even the most experienced, knowledgeable quizzers.

Each Six from Sinha will cover a range of topic areas, from geography and history through to science and popular culture.

The addition of this new bonus round means that, from Monday, every question pack will now boast 67 questions in total, with a pack included with every activation purchased to host a SpeedQuizzing Pro (in-venue) or Live (virtual) event. Activation prices start at £7 for Live events and £21 for Pro events.

Six from Sinha is the latest initiative to come out of our ongoing partnership with Paul Sinha, which we officially launched in February. Through this partnership, we hope to encourage more people to take up quizzing, while delivering a timely boost to morale and mental health.

As part of the partnership, Paul is regularly participating in a variety of virtual SpeedQuizzes (and in-venue events when the rules allow) giving members of the public the opportunity to go head-to-head with one of quizzing’s biggest stars every month.

Both Paul and SpeedQuizzing will also be sharing regular trivia teasers on social media to test the nation and show just how much fun quizzing can be.