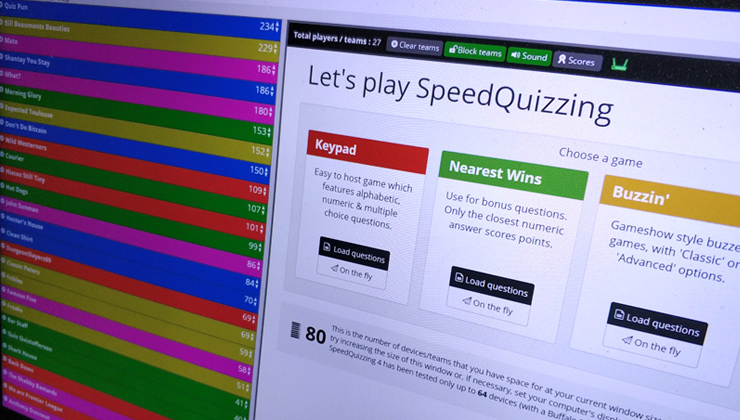 As most of you will know, SpeedQuizzing has been hard working on a brand new version of the software, but what version 4 will actually feature has been something of a bit of a mystery up until now.  In a series of articles leading up to the launch of SpeedQuizzing version 4.0 we thought we would demonstrate some of the new features version 4 will have to offer.

The first thing to note is that SpeedQuizzing v4.0 is being written in a completely different language to previous versions, so in essence the task has been to rewrite the software from scratch.  Moving forward the new language should help us to update the software more frequently, bringing you more exciting new features on a more frequent basis.

Another key thing to note is that v4.0 will look VERY different to what you’re used to.  Once it is released, we strongly recommend that all hosts take the time to go through the software and familiarise themselves with the new layout and features in advance of hosting any public events.

When teams join the quiz you get a notification to show they are attempting to join, at which point you accept them in and they then choose their buzzer.  But what about teams who join but then start inputting silly answers? Or perhaps teams that misbehave by buzzing in early on Buzz In rounds and generally just want to disrupt the quiz?

SpeedQuizzing V4 will have the option to ‘Block Teams’.  This feature will allow you to block teams individually or bulk block them all in one go.  Either way you have complete access over which teams get to answer 1 or all of your questions.

This feature will also be very useful in Tie–Break situations, where you want to ask a final Nearest Wins question to a couple of teams and you want to stop everyone else from answering.  Currently the only way you can do this is to trust other teams not to answer or to delete teams from the teams list on the left.  Now there will be a button marked ‘Block Teams’ which will place a pad lock against everyones name on the host’s screen.  You can then simply unblock the teams you want to continue with.

We are interested to hear about some other ideas people might have for using this feature in the system, so please let us know.  One feature I came up with myself is similar to that of ‘Fast Tracking‘ but perhaps not as harsh.  In the same vein as Fast Track you say that if the top 3 teams fail to put an answer or a correct answer, then those 3 teams are blocked from the next question, forcing them to answer, perhaps in Evil Mode type rounds.

Blocking teams might not sound like much of an addition in itself, but I think there will be some instances that this will be a very useful feature indeed.  That is the first of our announced features. Stay tuned for the next article.