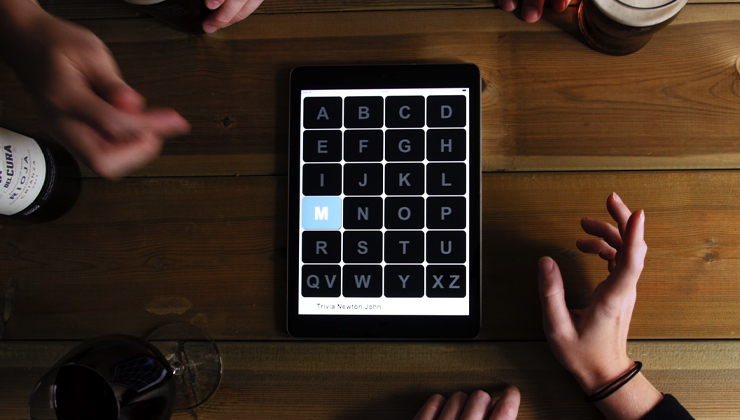 Many of the greatest innovations tend to be beautifully simple (at face value anyway), from the London Underground map to the modernist homes of the 60s that said “D’you know what? sod mock Tudor, let’s have clean lines and practical features!”

We sought to imitate this simplistic approach with our SpeedQuizzing smartphone pub quiz app, and we like to think our creation has the way we quiz throughout the land. This app has attracted a new breed of pub quizzer who like their gameplay to be both fast and fair (the rapid pace of SpeedQuizzing makes it impossible to cheat by looking up the answers to questions).

So far, so beautifully simple, and the uncomplicated ethos of making the SpeedQuizzing app easy to use for players and quizmasters goes to the very heart of the game’s mechanics. One feature which exemplifies this is the unique single letter answering system used in the core ‘Keypad’ rounds.

When SpeedQuizzing’s Keypad games were being developed, the objective was to make SpeedQuizzing hosting software capable of marking the player’s answers itself, thus making life simple for the quizmaster. This was straight-forward for both multiple choice and numeric question types because the answers will always be absolutely one thing or another; A,B,C,D,E,F and so on for multiple choice questions or a number for numeric questions.

No problems there, but our development team faced a far tougher challenge in getting the app to effectively mark questions which would require players to enter a whole word – whatever your view on spelling errors and typos, most people would agree that if a quizzer answers a question correctly in essence, they should be awarded the point. Programming the app to account for spelling variations and a huge range of possible typos and spelling mistakes would have been an impossible task…

Enter stage left single letter answering! Here’s how it works… On a Letters question in a Keypad round, the quizmaster reads out a question as normal, but asks that all competing teams simply answer by keying in the first letter of the answer, whilst also abiding by a couple of simple rules (1. if the answer is a person’s name, input the first letter of their first name, omitting any titles such as Dr or President. 2. If the answer is a title such as a book, song or film, disregard any instances of “The” or “A” at the beginning… So for example, if the answer was “The Lion King”, you would be correct if you keyed in the letter “L” ). Some savvy players have even capitalised on this single letter entry method of input by guessing what letter an answer might be likely to start with, when they don’t know the answer to a question (it’s worth remembering more words start with ‘S’ than any other letter!)

Thanks to innovations like the single letter answering method, it has been possible for the SpeedQuizzing app to offer beautifully simple gameplay for quiz hosts and players alike. Only pubs and bars using the SpeedQuizzing system offer features like this, so we recommend you make the effort to find one in your area for the cutting edge quizzing experience that’s sweeping the nation!